The geological history of the Taganay district begins with the earliest era of the Earth - the Proterozoic. About 1.5 billion years ago, in the contact zone of the Russian and Siberian platforms, a huge deflection (Ural geosyncline) was formed, filled with the waters of the ancient sea. In marine conditions, the accumulation of a powerful stratum of Riphean deposits (their folded structures now form the entire Zlatoust region), extending far to the south (Satka, Bakal) and to the west (the Bashkir anticlinorium). In the east, the Riphean deposits are immersed in young Paleozoic formations, which sharply distinguishes the western (middle-mountain) zone from the eastern (hilly) zone, both geomorphologically and in terms of mineral resources. Ancient Upper Proterozoic deposits of the mountainous region of Zlatoust contain deposits of magnesite (Satkin and Semibratskoye deposits), siderite and magnetite (Bakalskoe deposit),  ironstone (Kabanovskoye, Orel, Tesmini and other deposits), copper ores (Fofanovsky, Andreevskoye, Urenginskoye, deposits), barite (Barite Medvedev field).

At the end of the Riphean, the sedimentation of the Ural geosyncline was repeatedly interrupted by folded motions, with which intrusive (deep) magmatism, metamorphism and formation of deposits of various minerals were associated. Some researchers (Steinberg, 1975, Zhdanov, 1980) prove the existence on the average of the Riphean of a single volcanoplutonic body, which includes all intrusive massifs known in the region, ages 1.1-1.4 Ga (Kusa-Kopan intrusion, Ryabinovsky massif, Gubensky massif and others). With these intrusions are associated deposits of titanomagnetite (Medvedevskoe and others) and skarn minerals (mine Akhmatovskaya, Nikolaev-Maximilianovskaya, etc.). According to other researchers (Shardakova et al, 2005), there are at least two intrusive massifs. Data on rock petrology obtained by the authors in the study of granitoid massifs in the area of ​​articulation of the Uralian orogen with the Russian platform in the zone between the Ufaley block and the Zyuratkul fault are presumably indicative of the existence of two types of granitoids: those of relatively ancient age (1340-1346 my) , with a large role in the substratum of continental (crustal) material (the Gubensky massif, the Ufalei and Yurminsky complexes), and the younger (317 million years) granites (Nizhneaufalei and Kialim massifs), in s bstrate which a significant role was played by the oceanic (island arc) material (mantle and crust).

In the era of Baikal folding (680 million years ago), some parts of the Ural geosyncline, including the territory of the Taganay mountain massif, were compressed into folds of the meridional strike. Then they represented a mountain construction of a cordillera type with peaks of the order of 10-15 km covered by the Lapland glaciation, as evidenced by the findings of diamictites (rocks of glacial origin) in the western foothills of the Bashkir anticlinorium. 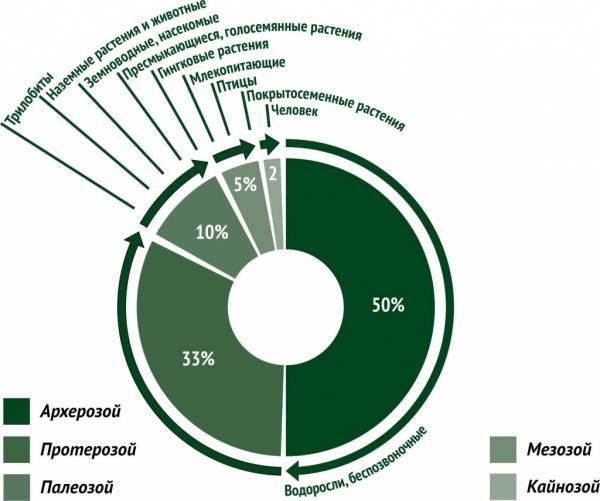 At the beginning of the Paleozoic (490 million years ago), the Urals again experienced an intensive subsidence, lasting for 170 million years. However, a number of ridges of the Southern Urals, including the territory of the present-day Zlatoust Urals, continued to remain a land eroded from the west and east by the warm waters of the tropical sea. At the end of the Paleozoic (280 million years ago), the Ural folded region with the height of mountain ranges equal to the modern Alps was formed at the site of the interplatform deflection, in which fragments of Baikalides (Taratash and others) were isolated - blocks of an older crystalline basement corresponding to age East European (Russian) platform.

At the beginning of the Mesozoic (235 million years ago), the Urals entered a platform (flat) stage of development, which subsequently led to the formation of a typically shallow-looking appearance of the territory as a result of intensive land alignment in a hot arid climate alternating with humid.

Completion of the construction of the mountainous Ural country took place 25 million years ago in the Cenozoic (Pliocene), manifested as an intensive Alpine mountain building. Activation of vertical tectonic movements created the arched-blocky shape Zlatoust mountainous country, having built a ridge parallel ridges (Jurmala, Big Taganay, Itsyl, Urenga, the Urals). These ranges and frame composed of Archean and Proterozoic age from 3.2 to 1.5 billion years (Krasnobaev et al., 1970), which include those allocated 12 suites consisting of four series (from older to younger). Taratashskoy , Burzyan, Jurmati and Karataus. Transformed by metamorphic processes, ancient deposits are not very diverse: they are a rhythmic alternation of crystalline schists, amphibolites, quartzites, carbonates, conglomerates. The magmatic rocks associated with them are represented by granites, granite gneisses, gabbros, diabases and diorites. The vein rocks are represented by muscovite pegmatites. The most common crystalline schists and quartzites, forming all the main peaks of Taganay. A unique type of Taganay quartzite - aventurine - was used in the 18-19 centuries as an ornamental stone. Carbonates (limestones, dolomites, magnesites, marble) are less often exposed on the surface and in most cases are explored in the southwestern part of the region. The reference section of carbonates is exposed at the confluence of the Kusa and Ai rivers, with a labeling layer of shell-shaped dolomites in the sole. Amphibolites form the western part of the region, as well as the watershed of the Satka and Kuvash rivers.

Cenozoic loose deposits formed in the process of physical and chemical weathering of Proterozoic rock rocks form low relief areas and are confined to valley depressions and tectonic zones. Alluvial (river), deluvial-eluvial (slope) and biogenic deposits are everywhere fixed in the form of pebble-sandy loamy braids with interlayers of peat, silt and gravelly clay-silty plumes.

Area and linear weathering crusts are widespread in the geological section of the region. The linear crust of weathering, represented by clay material, is confined to tectonic faults and their bursting faults with a thickness of up to 100-120 m. The weathering crust covers the Proterozoic surface with an almost continuous cover, has a relatively flat roof, which decreases toward the rivers, with an extremely uneven sole. Together with deluvial clays, the area crusts of micaceous shales can be considered as building and refractory raw materials.

Tectonically, the region is located within the Central Ural uplift, in which structures of the first order are distinguished - the Kuvash-Iremelian meganticlinorium and the Ufa-Taganay anticlinorium within the Uraltausky meganticlinorium. Within the structures of the first order, a number of lower-order structures are noted, the main of which are: the Krylov megasyncline, the Guben fold structure, the Nazminsk-Urenginsk megamonoclinal, the Zlatoust-Ai megasinclinal, the Kialin-Urals meganticcyll, the Kushtumgin-Verkhneaysk megasyncline. The folded structure of the north-eastern part of the territory in question are composed primarily of rock and Taganai kuvashskoy suites and distributed within the ranges Large, Medium, Small Taganay, Itsyl, Ural, Urenga, long cape, Nazminsky. The southern and central parts of the region are composed of rocks of the Urengin and Uytashsky suites with fragments of rocks of the Taganay Formation in the nuclei of anticlinal folds. Here has the greatest representation of Ai-Zlatoustovskiy megasinklinal (series advantageously concave folds), which are located in the nucleus quartzite uytashskoy Formation, and the wings are folded marbles and schists upper member urenginskoy Formation.

From the west and east, the Zlatoust-Ai megasyncline is bounded by Slane and Urenginsky faults (respectively). The fine linear folds that complicate the megasinclinal have a symmetrical structure - the western wings of the anticline are falling to the west, the eastern wings to the east at angles of 20-40 °, the synclines have shapes with the eastern fall of the western wings and the western fall of the eastern wings. Stretching of the structures is northeastern, consistent with the general tectonic plan. The same direction is maintained by breaking discontinuities, cutting folded structures at an acute angle. The largest disruptive disturbance is the Urenginsky fault, passing along the left bank of the Ai River valley in the south and in the center of the district, where it is fixed by a chain of ore occurrences of brown iron ore and serves as a supply channel for dykes of diabases. In the north, the fault continues within the intermountain depression of the rivers M. Tesma and B. Kialim. SA Zorin (1970) considers the Urenginsky fault, on a number of grounds, a regional structure of the second order, which is a constituent element of the Main Ural Fault. The Urenginsky fault is accompanied by numerous feathering faults of lower orders, which extend either parallel to the fault axis, or at an angle of 45 ° to it. All disruptive violations in the territory of the mountain Zlatoust are steeply falling or vertical, often accompanied by crushing zones. The horizontal thickness of the zone of crushing of the Urenginsky fault reaches a value of 150 m and is traced to a depth of more than 40 m. Tectonic faults are feeding zones for igneous rocks and groundwater.