A distinctive feature of NP "Taganay" is that on its territory there is a watershed boundary between the two largest river basins of Russia - the Volga-Kamsky and the Ob-Irtysh. In other words, the river network of the national park feeds its waters the Caspian Sea in the south and the Arctic Ocean in the north. At the same time, only one mountain water stream - Big Kialim - carries its crystal clear waters into the arctic Kara Sea. But with collects Caspian Taganay a fan of blue jets - border River Park Kusa with numerous tributaries, including the four-river Shumgi baby, Big and Small Ribbons, Black River, Lubyanka, Kamenka, GUBENKO and others.

The watershed between the basins of the Volga and Ob runs along the ridges of Jurmala, Big Taganay (from the northern spurs of the Far Taganay to the southern end of the Valley Fairy Tales - the high plateau between Response Ridge and Kruglitsa), then - on the northern spurs of the Middle Taganay, mountain "Mont Blanc" (saddle between the Middle and Maly Taganay), the northern end of the Small Taganay and comes to the top of the Sharp Urals mountain range, along which it follows further to the south. The watershed of these basins, composed of granites, is very expressive. It is so flat and extended (up to 2.5 km.), That the pass from one hydrographic system to another is almost impossible to observe. Only in rainy weather, when the space of the watershed is a continuous swamp, you can see how at some points an absolute watershed inflection occurs caddis spreading in different parts of the world: one to the south, the other north.

The hydrographic network of the park is characterized by a high density (0.41 - 0.50 km / km²). All rivers belong to the category of mountain streams with rapids, significant slopes and high current velocities (up to 1m / s), possess the conditions of a natural hydrological regime. 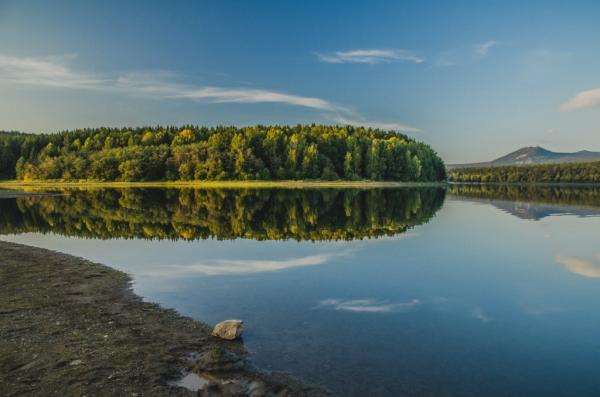 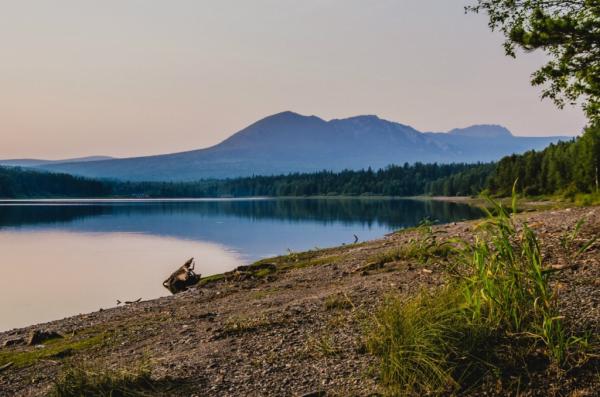 The rivers are fed by atmospheric precipitation, groundwater outflows and moisture accumulated in the marshes. The average long-term river flow modulus is 7-9 l / s per square meter. km.

The chemical composition of surface waters is more or less homogeneous, more often we are dealing with sulfate-chloride-hydrocarbonate potassium-sodium-magnesium type of water. Prevalence in water magniyasvyazano proliferation in the area Taganay rocks and minerals magnesium-alumino-silicate composition, such as the pyroxenes, amphiboles, garnet, biotite, staurolite. Feldspars (albite, orthoclase, microcline with muscovite), in large quantities represented in vein formations of Taganay rocks, are sources of sodium and potassium ions.

However, some hydrochemical anomalies are inherent in Taganai watercourses. For example, low calcium content is associated with virtually complete absence of liming ground, due to the absence of carbonate rocks sectional composition (limestone, marble, dolomite), which also affects the acidity of water - pH on average equal to 6.0 to 5.0 and comes that characterizes water as acidic with a low ability to survive water microorganisms. The presence of iron in the water has a natural geochemical origin (the region is located in the mineralogenous band of iron ore deposits), and is also caused by swampy watersheds. Moreover, the content of iron always exceeds the value of the maximum permissible concentration established by sanitary norms for drinking purposes. The most "glandular" water runs in the rivers Big and Small Kialim.

The water hardness of Taganai rivers is classified as very soft (from 0.05 to 1.5 meq / liter) and soft (1.6 to 2.0 meq / l), despite the magnesium composition, which is compensated by a low content of calcium salts and low concentration of magnesium salts. Water of Taganay has leaching and acid aggressiveness.

Suspended substances, worsening drinking water quality, were found only in the lower reaches of the river. Large Tesma (below the reservoir). On the mineralization of water are ultra-fresh.

Flooding in the area of ​​the national park occurs in the second decade of April, ends at the end of May. It should be noted, however, that during the period of strong summer rains (most often in July), usually small-water Taganay rivers and streams within literally a few hours can turn into full-flowing turbulent streams, crossing through which can make considerable difficulties. So, in July 1994, during the unusually protracted torrential rains, Big Tesma completely demolished the old Kialimsky Bridge, which stood for several decades. In May 2005, a new high-quality bridge on the Great Kialim River near the Kialim cordon was blown up by the abundant spring flood. Prior to this, the bridge was repeatedly flooded during a sharp and rapid rise of water in the river during rainfall, striking with its stability. 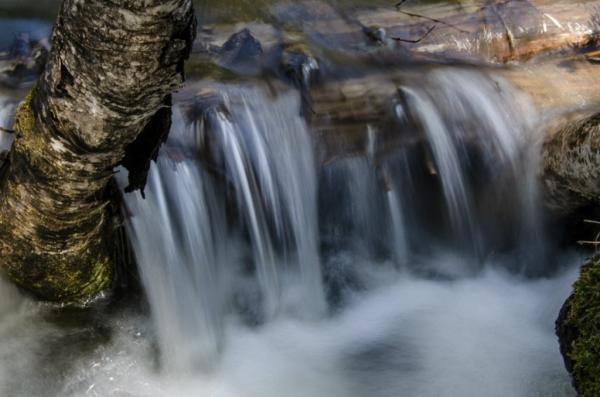 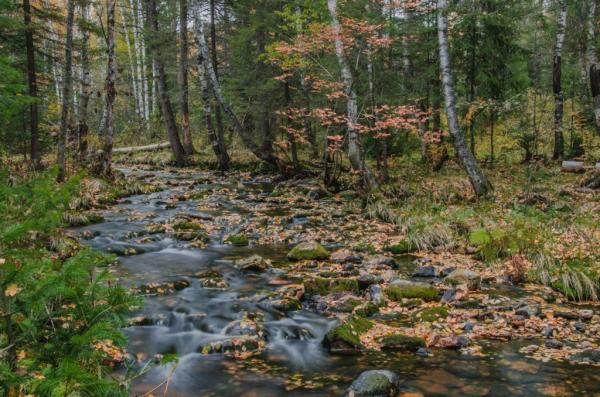 Underground groundwater often comes to the surface in the form of mountain keys, which are dozens in the Taganay area. The most famous of them is the White Key on the eastern slope of the Double-headed Hill. The Taganay’s underground waters are very poorly mineralized, the softness of the water, for example, the White Key according to the estimates of the Moscow University geographers is even higher than that of thawed snow. The Taganay Springs are confined to zones of tectonic near-fractional crushing located above the erosion network marks. Water-bearing rocks are crystalline schists and quartzites of the Upper Proterozoic. Water availability of springs depends on the degree of opening of cracks to the depth of the core (20-30 m): the filling of cracks by clay eluvium reduces it (springs Tarkhanov, Merry key); sections of detrital structure of cracks, on the contrary, increase the flow rate of springs (White key, Taganai).

Underground water, mainly non-pressure (low-pressure), with a free surface. The supply of aquifers, mainly infiltration (atmospheric precipitation), and also due to surface and condensation (formed by the condensation of water vapor atmospheric air in the cracks and voids of rocks) waters. Hydraulically connected to the groundwater of neighboring cracks and surface waters, where their main drainage is carried out.

The temperature of the oxen in the mountain springs and Taganay rivers even in the warmest time of the year (in July) does not exceed 14-16 °, in the White key - from 3 to 4 °.

The number of sites occupied by swamps is relatively small. However, in the tract Kialimskaya pad (north-east of the national park) in the basin of tectonic origin is situated the Taganay swamp (local name - the Great mossy swamp) with an area of ​​36 sq. M. km. The second largest among the twelve largest bogs of the Chelyabinsk region. Many parts of the park are prone to water logging, which is associated with a close groundwater table.