Orographically, the territory of the park is a system of mid-mountain ridges that run meridionally. The most western of them is the Nazmin ridge (height up to 884 m.) With its northern extension - the ridge Dolgiy Cape (average height about 600 m.). The central part of the national park is occupied by the Taganay mountain range - a unique creation of nature from stone and taiga. Bald-mountain  klippes at the tops of mountains, granite giants among the age-old forest, picturesque zigzags of river streams, mountain tundra and mossy marshes - all this is Taganay! Its western part is occupied by the Greater Taganay Range with its four prominent peaks - the Double-Headed Hill (1034 m to the south, 1041 m to the north), the Response Ridge (1155 m), Kruglitsa (1178 m - the highest point of the Taganay NP) and Far Taganay (1112 m.), Which, with its six-kilometer spur stretched to the northeast, smoothly passes into the Jurm Range (1002 m.). In the central part of the park there are: a short range Middle Taganay (959 m) and to the east connected with it through the plateau the Maly Taganay Ridge (1,033 m). The eastern boundary of the park passes along the Ural ridge (930 m.), Passing in the north through the saddle to the Ityl Ridge (1068 m).

Most of these ridges, with the exception of the Greater Taganay, are slightly dissected and have a central axial part with vertices located within it, representing rock ridges stretched along the axis of the ridges. The Greater Taganay Range does not have a well-defined axial part and is divided according to the isohypse (line of equal heights) of 750 m into two large ridges: the southern one with peaks. The Double-Headed Hill - the Response Ridge - Kruglitsa and the northern - the Far Taganay with spur. According to the 700 m isohypse, this ridge is united in a large conglomerate with ridges: Nazminsky (south-west), Middle and Small Taganay (southeast), and Yurma (north). Another large conglomerate is formed by the Ural Ridge and Itsyl, connected by an isohypse of 750 m. Between these two conglomerates of ridges are the valleys of the Great Kialim and Malaya Tesma rivers.

The steepness of the slopes of most ridges is 25-35 ° in their upper part, 15-25 ° in the upper part, 10-15 ° in the middle, and no more than 5 ° in the valleys. The tops of the ridges are most often rocky and inaccessible, crowned by bizarre remains and steep ridges. The most impressive in this respect is the mass of the Response Ridge. The slopes of many peaks (Kruglitsa, Itzil) are continuous piles of large stone blocks - the kurumni. These stone debris slowly "drain" downward, forming at the foot of the whole "stone rivers", the largest of which is in the saddle between Double-Headed Hill and Middle Taganay. This Great Stone River stretches for about 6 km. And reaches a width of 100-200 m. 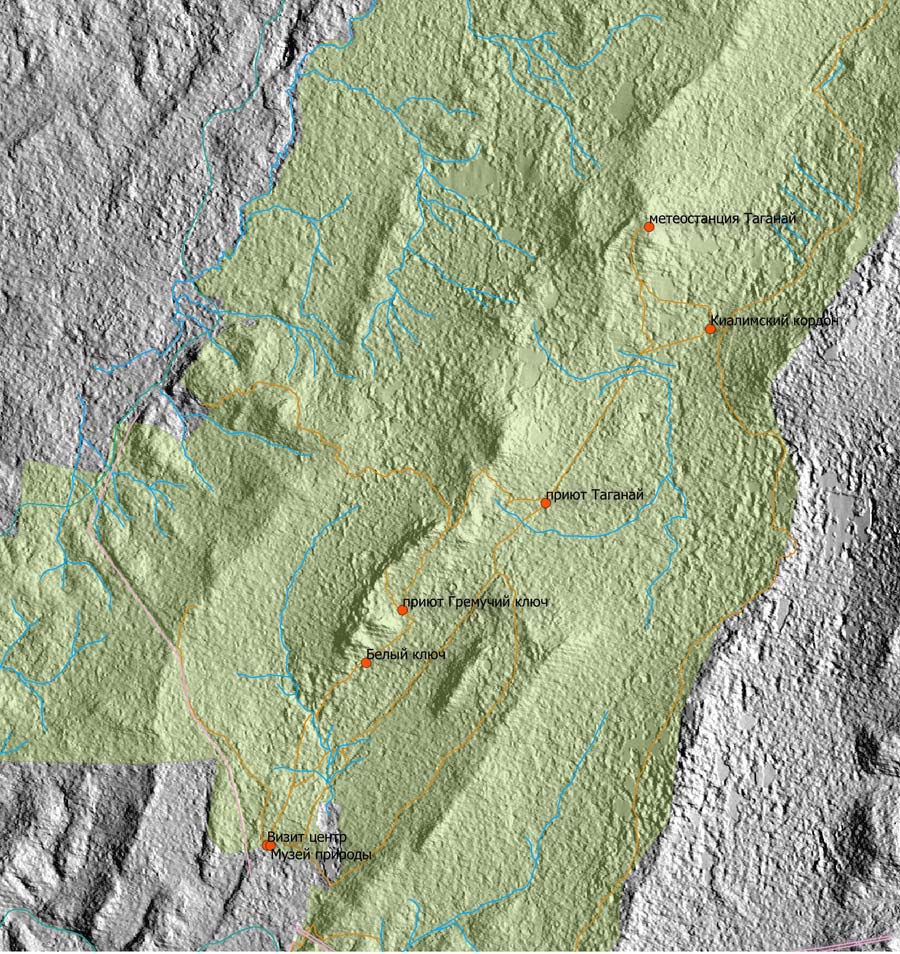