In the national park, almost half (4 out of 9) of vegetation types, that found both in Russia and in general in these latitudes of the northern hemisphere, can be found. Forests cover 93% of the park. There are about 30 species of trees in the park, and 14 species are forest-forming. These are such species as Siberian spruce, Siberian larch, Siberian fir, Common pine, weeping birch, white birch, Tilia cordata, Scotch Elm, speckled alder, Aspen, goat Willow, bag willow, almondleaf willow. 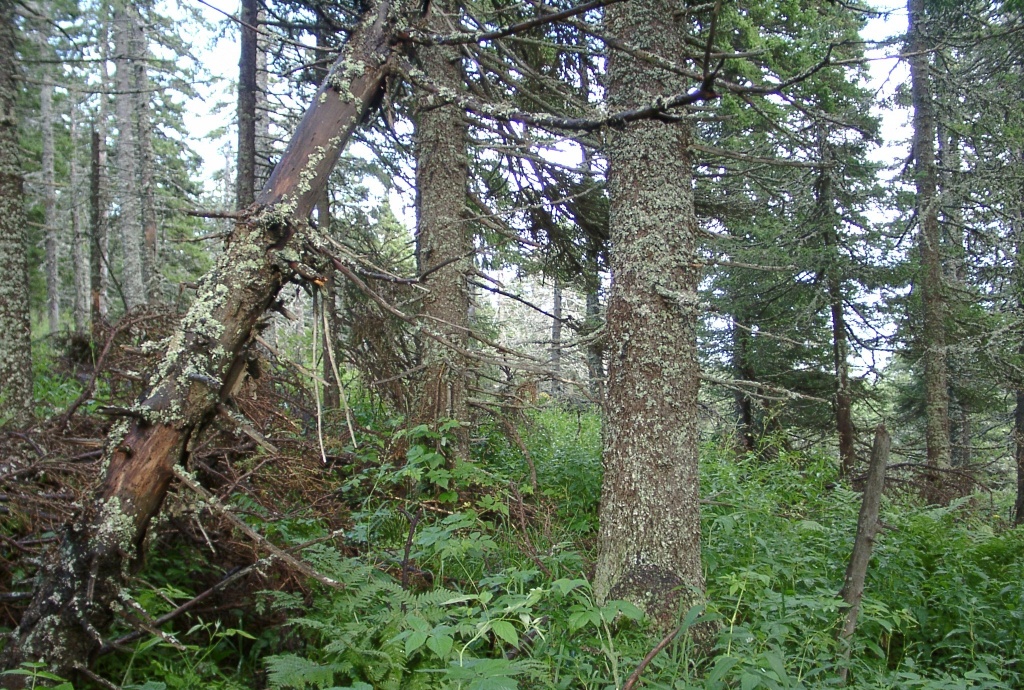 The eastern part of the park, which is more dry than the western one, is occupied by light coniferous taiga forests located in the eastern slopes and foothills of the Urals. Here larch-pine forests predominate, with a Tilia cordata and a willow birch in the undergrowth. Their main breed is a common pine with an admixture of birch. In some places Siberian larch adds to them. In the park there are almost all types of pine forests. The most common are cranberry-bilberry coniferous forest with moss cover. A goat willow forms the undergrowth in such forests. In the shrub-grass cover Chamaecytisus ruthenicus with mixed herbs predominates, cowberry, bilberry, stoneberry are common. 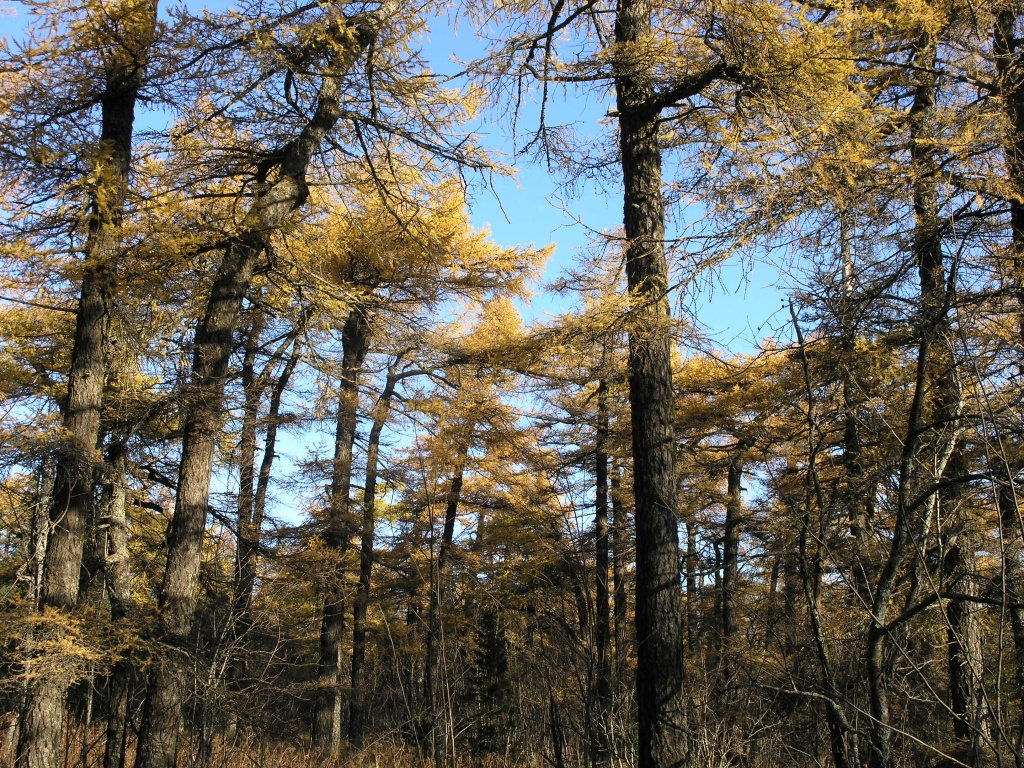 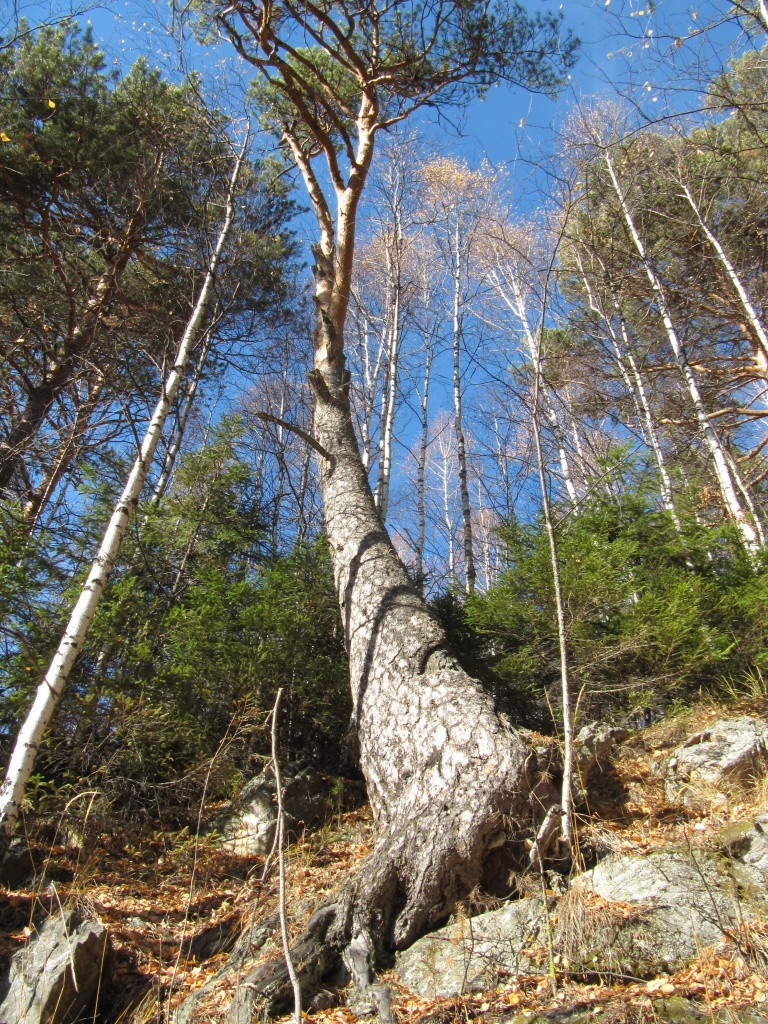 There are also lots of broad-leaved forests in the park. They occupy the north-western part of the park (southern and south-western spurs of the Jurma Range, Mount Klenovaya and Lipovaya). These sites are located on the eastern limit of the distribution of broad-leaved forests in Russia. Among the woody species here are the Norway maple, Scotch elm, Tilla Cordata, sometimes founds common hazel. A few tens of thousands of years ago, these forests occupied almost the entire area, which is occupied by the spruce-fir taiga today. But under climate changes, light coniferous taiga was superseded and now preserved only in natural boundaries with a softer microclimate. Linden forests with an admixture of Scotch elm and Norway maple can be found in the southwestern and central parts of the park (the ridges of Nazminsky, Big and Small Taganay, Itsyl). 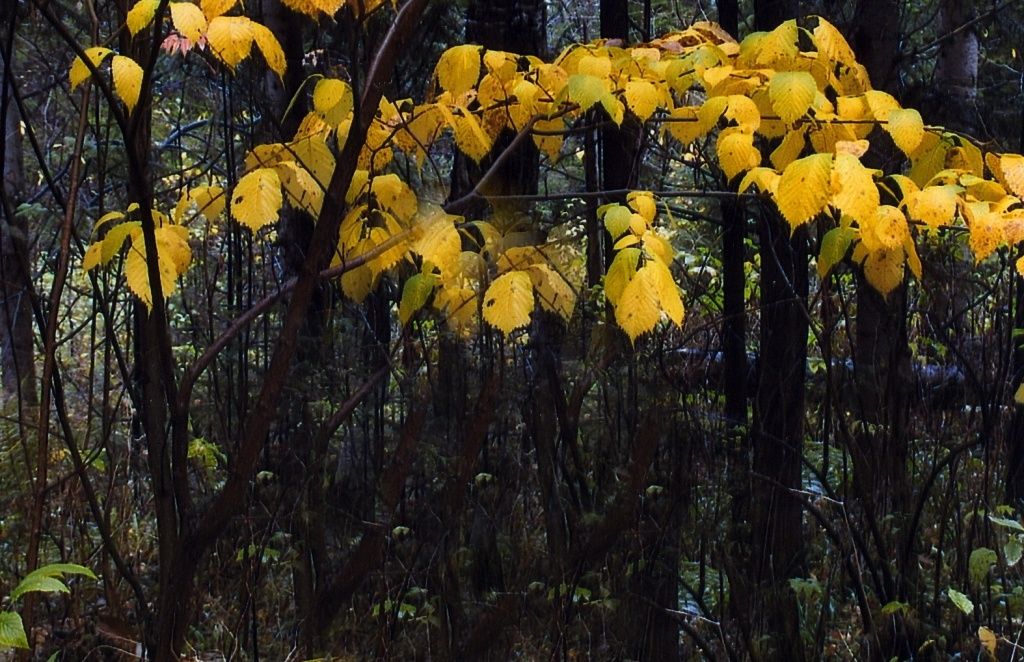 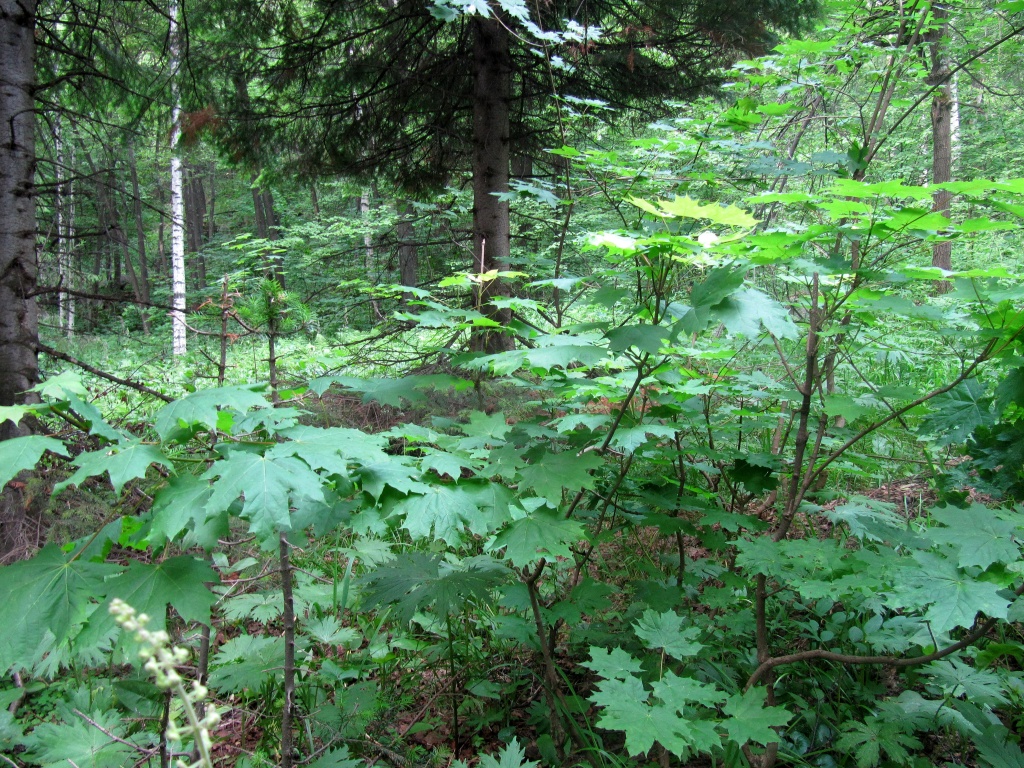 The high mountains of the central and eastern parts of the park (Jurma, Big Taganay, Itsyl) are characterized by clearly expressed altitude zonality. The belt of dark coniferous forests rises up to 600-900 m above sea level. Above these heights begins the sub-bald mountain belt, the vegetation of which is represented by undersized fir forests and sparse forests (usually with an admixture of  birch, Siberian larch and Siberian rowan, with blueberry or cowberry in a shrub-grass layer and powerful lichen or moss cover). Also sub-blad mountain belt represented by , stone rivers, juniper scrubs and birch crooked forests , that alternate with areas of mountain high-grass meadows, edificators of which, most often, is Alpine mountaineer and various grains. In the lower part of the belt are widely distributed high-grass meadows (in the wet areas - fox-tail-tussok, sedge -tussok and - fox-tai -sedge, in drained land- woodreed meadows). 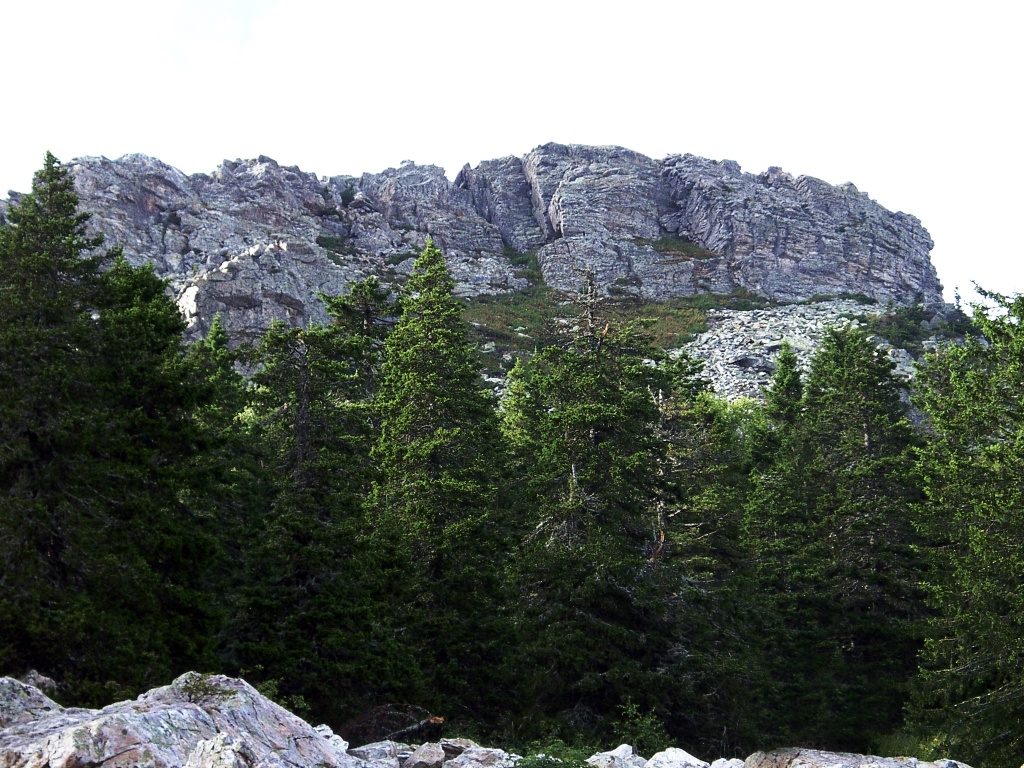 The peaks of the mountains are occupied by mountain tundra of the northern type. The most widespread are the shrubby-lichen mountain tundra with blueberry, cranberry and crowberry predominance in the grass and shrub layer, and lichen species, which belong to clans cladina and cetrarium, prevail in the moss-lichen type. In the mountain tundra belt large areas are occupied by outcrops of rocks and river stones - huge stone placers, devoid of vegetation and sometimes descending into the forest belt in the form of wide stone streams. The vegetation of the bald mountains is represented by lichen communities on the stone rivers, areas of mountain tundra that occur on flat plateau-like peaks, and also by Siberian juniper and Siberian spruce with lichen or moss cover. The flora of the mountain-tundra belt is depleted, but it includes several Arctalpine species, that cannot be found in more southern highlands of the Southern Urals. These are such species as net-leaf willow , vernal sandwort and Lapland reedgrass. In addition, there are a number of arctoalpine species (gray-green  willow, Alpine Knotweed, Arctous alpina , rock sedge, Siberian wood rush) and high-altitude endemics of the Urals (Permian anemone, Ural Gypsophila, Alchemilla haraldi, Alchemilla Riphean, Uralsky woodreed, South-Urals fescue, Igoshina Fescue, a  bluish fox-tail). 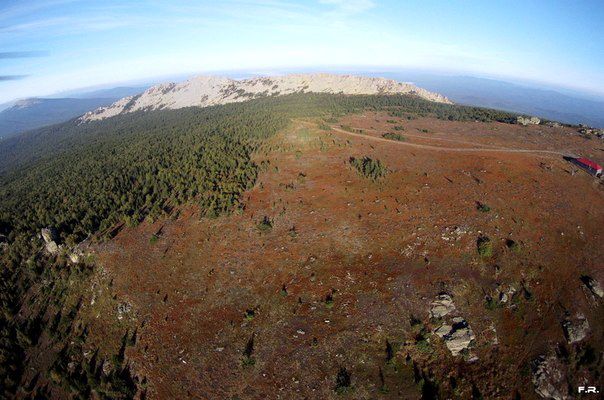 Mountain tundra of the Far Taganay

Another integral and very important component of the natural communities of the Taganay mountain complex are swamps and wetlands. Swamp flora makes up 19% of the total number of plant species. This shows a fairly large part of it in the formation of forest and marsh ecosystems in the park's territory. In the vegetation cover of Taganay swamp ecosystems, presented a number of boreal species rare for the Southern Ural (moorberry, bog cranberry , blueberry, lustwort, English sundew, few-flowered sedge, cloudberry, double-leaf) 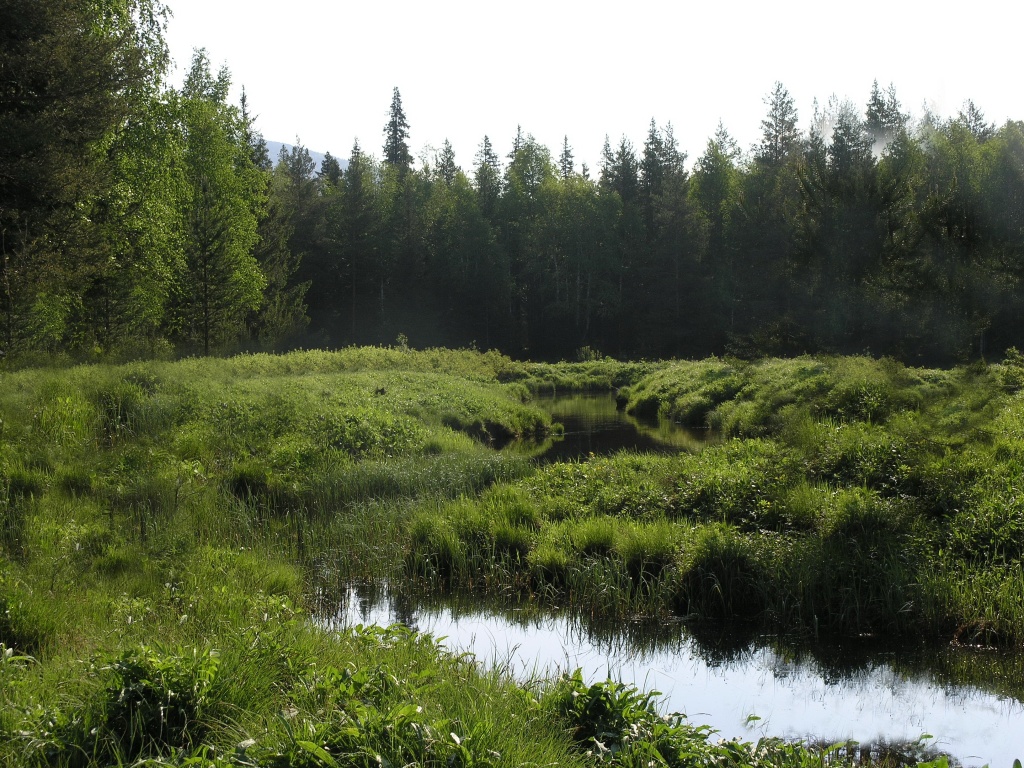 Plant communities Taganay had a long history of formation for many millennia, and now the Taganaya flora presents a relic complex of Pleistocene pine-birch-larch forest-steppe species that were located along the edge of the glacier during the glacial epoch. 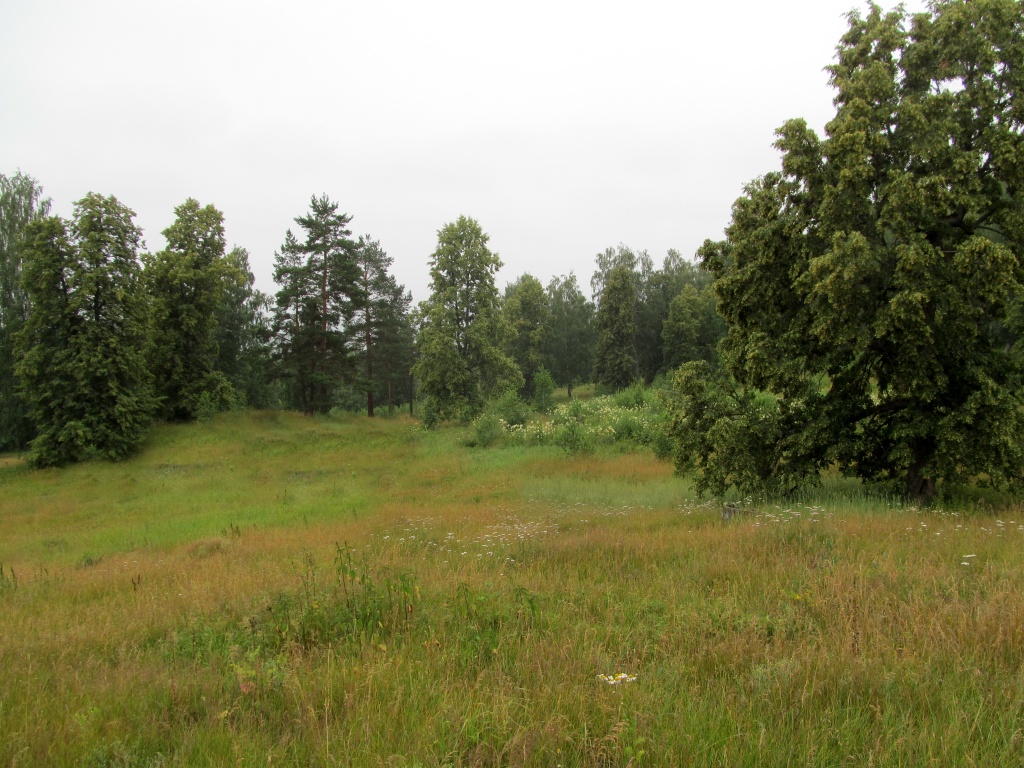 Foothill forest-steppe of the Long Cape

Vegetable world of Taganay is a kind of multi-colored knot that connects several natural zones. From the north, along the ridges, there enters the zone of mountain spruce and fir forests of the middle taiga, from the east - south-taiga forests with an admixture of larch and birch and birch-pine forests. At the same place, you can see the mountain steppes and the highlands, which are occupied by high-grass meadows and mountain tundra. Here, in a small area, you can see the unique neighborhood of East and Central European plant species with West- and Central-Siberian species. Taganai ridges are a peculiar meridional corridor for the flora. So, the areas of many species of the Arctic Ural flora spread through the high mountains far to the south, and on the other hand, along the eastern foothills of the southern Urals, the steppe flora of the south penetrates to the north.

In a word, two floristic languages ​​merge into the whole territory of the park - one from the north, running along the axial part of the ridge, the other from the south - along the eastern foothills. Flor of Taganay, like a multicolored mosaic, is formed by elements of the floras of Kazakhstan, Western and Central Siberia, the Urals and the Volga region, the Center and the North of the European part of Russia.

Relics are plants that have survived in a modern biota or in a certain region as a remnant of an ancestral group that was more widespread or played a greater role in ecosystems in the past geological epochs. Taganay relics are divided into: glacial (Pleistocene) and postglacial (Holocene). Glacial relicts are remnants of flora preserved from the time of the maximum Pleistocene glaciation in the Quaternary period. They occupy the largest share in the park: rock sedge, Lapland reed, three-dividing herringbone, yarrow, black whip, anthurium alpine, gray-green willow, willow mesh, common sheep, diphasiaustrum alpine, Siberian larvae, viviparous mountaineer, Gmelin vetchling. 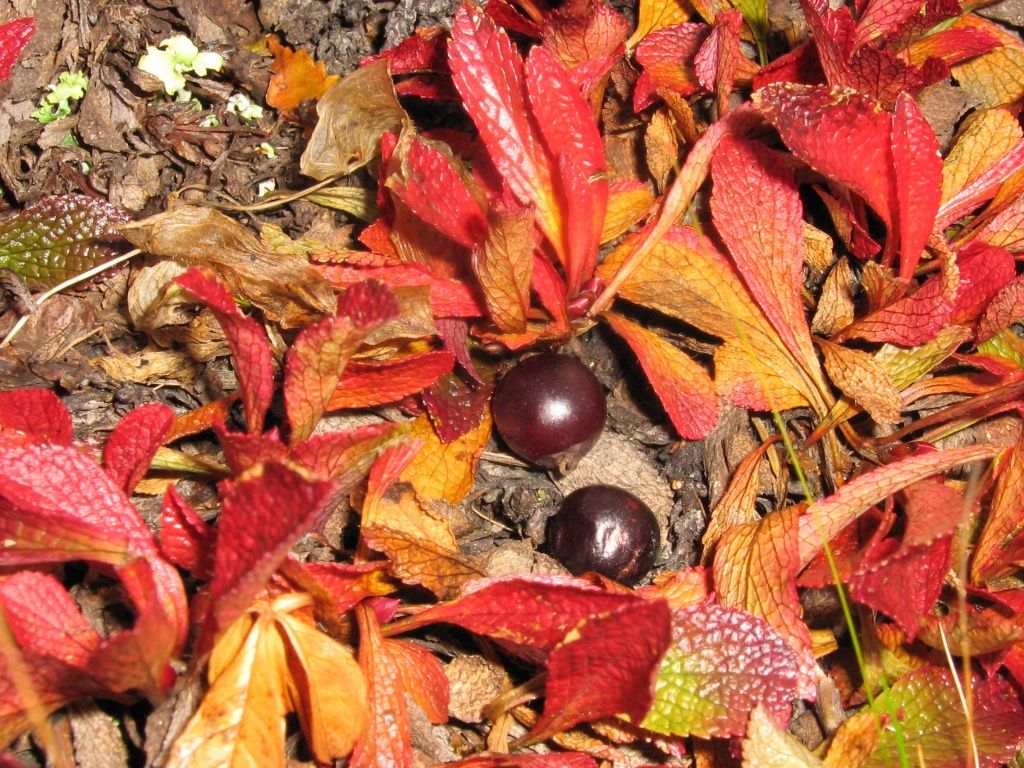 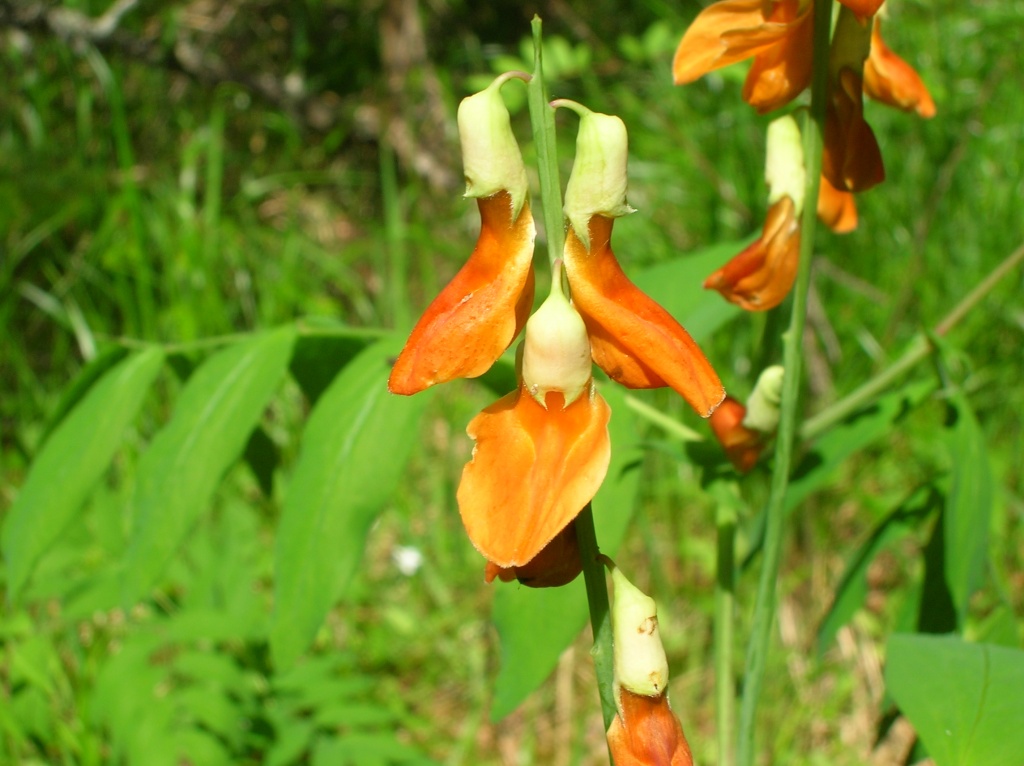 Post-glacial relict plants have been preserved, mainly in dark coniferous forests, which replaced broad-leaved forests. These include: a small-leaved linden, a forest purse, a leafy fragrant, a digital foxglove, a small-flowered saucer, a small-bilberry chubby, a long-leaved grasshopper, a small-flowered geranium, a geranium looser, a small-pointed onion, a cortiose primrose, a fescue forest, a violet pubescent and an amazing violet. 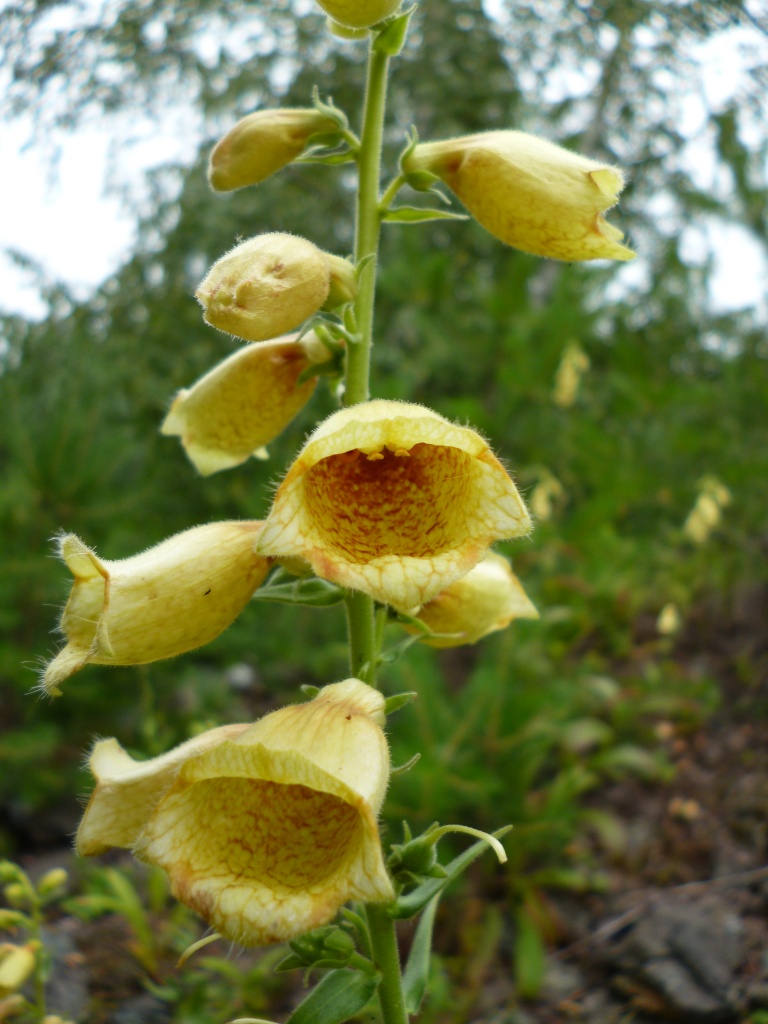 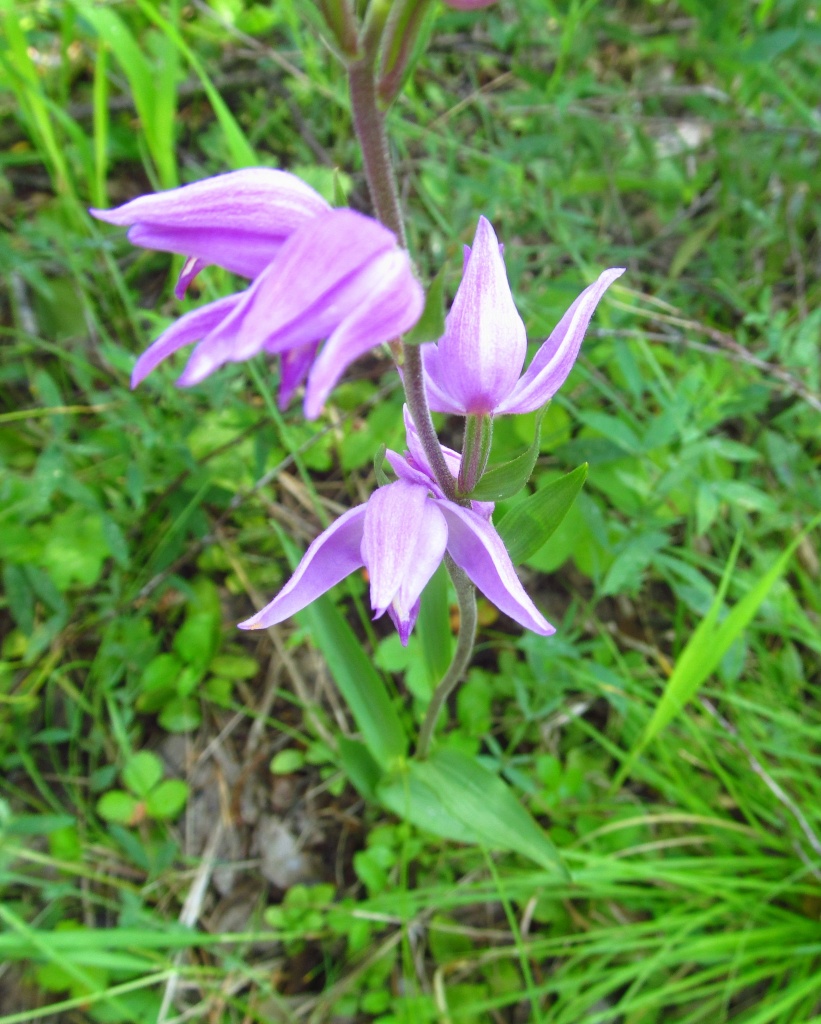 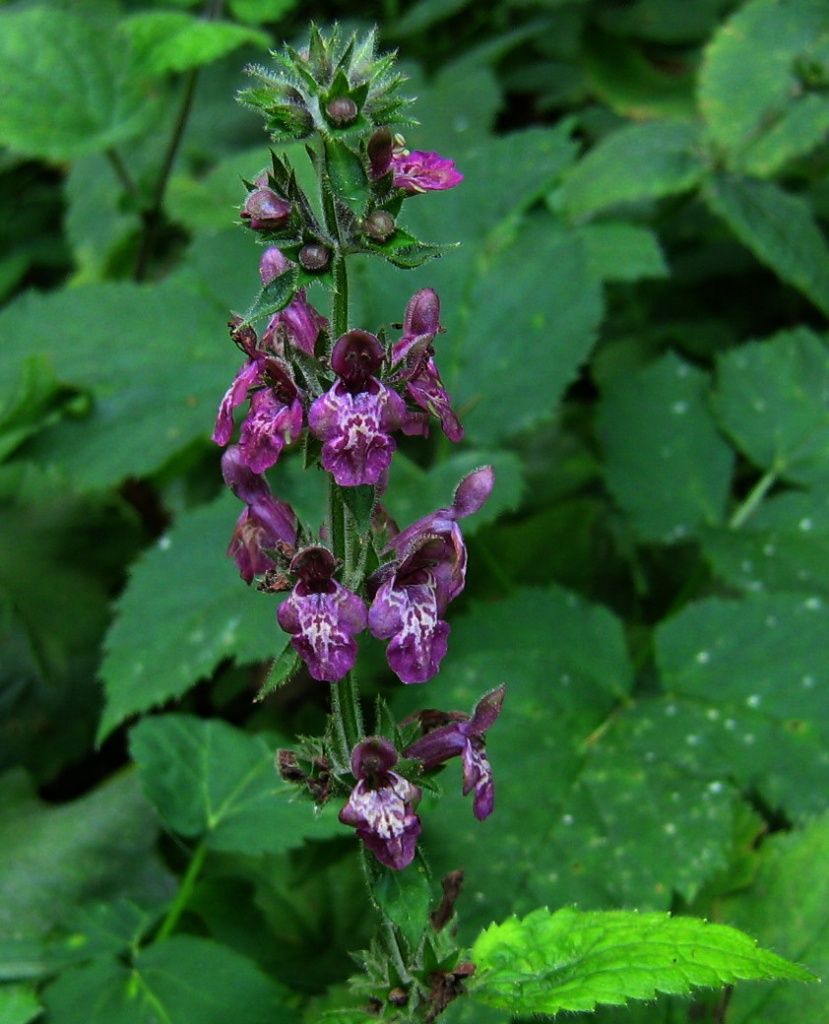 Many relict plants are rare and require protection. In the Red Book of the Chelyabinsk region, such relict plants as the Arctous alpina, Shiverekia hamstones, the small-mouthed chub, the willow mesh, the shallow onion, the long-leaved pollen head are listed. The Appendix to the Red Data Book of the Chelyabinsk Region includes Siberian zigadenus, rock sedge, ordinary baranas, species that need special attention to their condition in the natural environment. The total number of relics in the National Park ranges from 27 (PV Kulikov) to 57 (Ecological and Economic Justification of the South Ural State National Park "Taganay." Edited by SE Sychugov.) Sverdlovsk: ULTI. 1990).